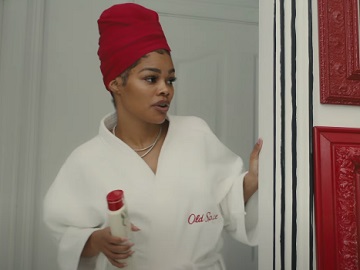 Old Spice continues its “Men Have Skin Too” campaign with a new installment, featuring Teyana Taylor and Iman Shumpert.

The spot features the couple fighting over the Old Spice Moisturize Body Wash. Teyana wants to use it but Imam wants to keep it to himself because men have skin too. When she tells him that she’s going to have the Lotion with Shea Butter, Imam puts an empty bottle of Old Spice Moisturize Body Wash on the bookshelf and asks her to take it from there if she reaches it. She uses a stair and puts her hands on it, but gets angry realizing he had pranked her.

The end of the commercial sees Imam completely naked, with foam covering his intimate parts, asking his wife if she’s looking for the Body Wash. She looks back at the camera and then rushes towards him.

Teyana and Iman, who have been married since 2016, starred in several other Old Spice ads to promote the brand’s Moisturize Body Wash.

Old Spice’s award-winning “Men Have Skin Too” campaign also features Deon Cole and Gabrielle Dennis, as well as Patti LaBelle, who made a cameo appearance as Deon’s mother-in-law.