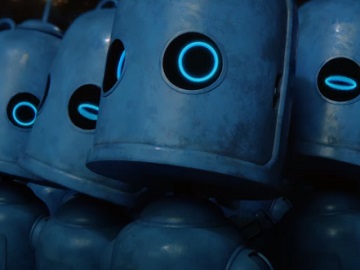 O2 presents its data pledge in its Christmas advert, highlighting that, for every plan purchased with them between 1 November and 31 January, they are donating 10GB of data to the National Databank to help tackle data poverty.

Developed by VCCP London and titled “We’re better, connected,” the ad shows O2’s robot mascot Bubl and thousands of his fellows setting out on a mission to connect people across the country and help tackle data poverty this Christmas.

The army of robots is informed, in the opening of the advert, that 1.5 million homes in the UK have no connection to the Internet. “Those people can’t learn or bank online, can’t see the family video call at Christmas,” a speaker voice tells them, highlighting that their mission is to connect the disconnected. The little robots embark thus on a journey across the country to spread bubbles that turn into data for millions of people.

When one of the robots accidentally enters a teenager’s room, a bubble released from its head goes to her smartphone and she gets a notification saying she’s got data.

“For every plan purchased with us, we’ll donate free data to someone who needs it,” the voiceover says at the end of the advert, adding the tagline “O2. We’re better, connected”.