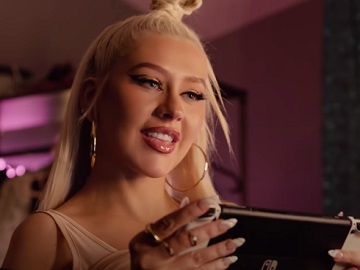 The singer stars in a new commercial for the brand, which shows her playing games such as SuperMario3D World with her son, Max, and her daughter, Summer, while she is away, on tours. She talks to her children through the Switch Online App voice chat and, when she returns home, she plays several other games with them.

“Staying close no matter how far I am, that’s my way of playing,” Aguilera says at the end of the commercial, which informs that the OLED Model of the Nintendo Swith is now available.

“The Nintendo Switch OLED has been a great resource and tool whenever we can’t always spend time together to be able to play each other and game. It’s something that you can take with you, either on a TV set or you can take it to travel and so we can check in with each other, we can have conversations as we play,” the singer said in a press statement.