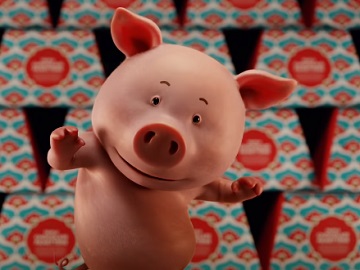 M&S has launched its Christmas campaign, highlighting that M&S has everything you need to make Christmas special.

The campaign, developed by ODD as a continuation of the retailer’s “Anything but Ordinary” brand platform, launched earlier this year, for its Autumn/Winter collection, includes two ads – one of Clothing & Home and one for the range of Festive Food.

The latter features the iconic Percy the Pig coming to life and discovering the delicious delights of the M&S festive Foodhall, from triple chocolate panettone to Collection smoked salmon. The little piggybank (voiced by Tom Holland) gets out from a gift box placed under the Christmas tree in a M&S store and has a conversation with the fairy (voiced by Dawn French) that accidentally brought him to life. He tells her he never had a Christmas before and then runs up and down the aisles, where he looks excited at the Christmas products. Seeing the Collection Golden Blonde Christmas pudding, he exclaims he has never seen anything so beautiful in all his 23 seconds of life. He also discovers the Collection Smoked Salmon, mild and delicate, and the Triple Chocolate Pannettone.

The retailer’s Clothing & Home advert features Madisyn Ritland as a woman who shops for gifts, hangs out with friends and has fun with her husband and kids at home, wearing holiday-themed PJs. During these iconic Christmas moments, she is shown dancing. One of the scenes even references Sia Fowler’s famous dancer, Maddie Ziegler.