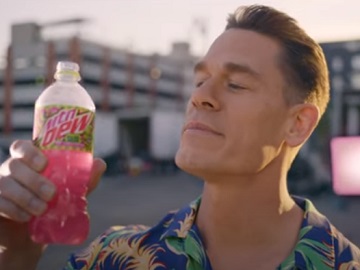 Mountain Dew has released a new teaser for its Super Bowl commercial, urging viewers to watch the ad and count the new MTN DEW Major Melon bottles in it for a chance to win a million dollars.

The spot features John Cena on set, apparently counting MTN DEW Major Melon bottles placed in the trunk of a pink and green 1993 Geo Metro convertible. He informs viewers that the one counting correctly the total number of bottles of MTN DEW Major Melon will have the chance to win one million dollars.

The brand’s competition begins no earlier than February 7, when Mtn Dew Major Melon commercial posts on Sponsor’s Twitter and ends when a verifiable entrant tweets the correct number of Mtn Dew Major Melon bottles, regular or Zero Sugar, (including 3D, drawn, neon, metallic & any color) that appear in the commercial.

Super Bowl LV, played between the Tampa Bay Buccaneers and the Kansas City Chiefs, airs live on CBS and CBS All Access on Sunday, February 7. Kickoff is at 6:30 p.m.

John Cena is no stranger to advertising. He has starred in campaigns for several other brands, including Experian.