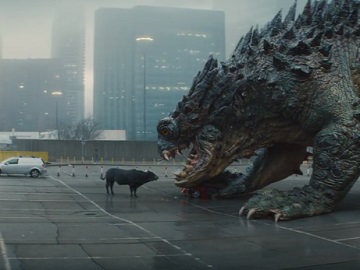 The spot features the bull near a red convertible, in a parking lot, being calm as Catamaran while a Godzilla-like monster shows up and destroys the car with its claw. The voiceover says the Money Calm Bull just saved 200 pounds ensuring the sweet ride and is as calm as Catamaran. He also urges viewers to “Get Car Insurance Calm” at the end of the advert.

The Money Calm Bull, introduced in June 2020, in a spot which saw the animal walking very calmly through a china shop and even serenely riding an asteroid heading for Earth, appeared in several other ads for the company. In a previous one, he is “calmer than a banana,” while a keyboarder generates an explosion in the garage they are both in due to the number of electrical devices used at the same time.

MoneySuperMarket works with hundreds of companies to help people get their household finances sorted. They invest their own money with a range of insurers to get cheaper car insurance deals for consumers. In addition, the company’s free monitoring tools will keep an eye on consumers’ bills, renewals and credit score, making it easier than ever to stay on top of their finances. Thus, it allows users to compare deals and take control of their energy bills and get notifications when they can save again, to see credit cards they are likely to get, plus their chance of being accepted, all while having their credit file and data safe, and get lowers car insurance prices.