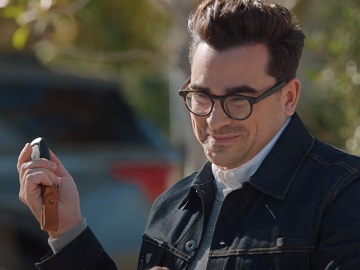 M&M’s has unveiled its Super Bowl commercial, highlighting that M&M’s can make almost any situation better, except when Dan Levy eats your friends.

The spot, titled “Come Together,” features a range of scenarios in which people apologize for what they did, offering at the same time a bag of M&M’s to those they hurt one way or another. A passenger on a plane apologizes to the one sitting in front of him for having kicked his seat on purpose and caused him to spill the drink on himself, a boss apologizes to a female employee for mansplaining, a young couple apologize to another couple who attended their gender reveal party and ended up covered in blue powder, admitting that they should have just told them it’s a boy, a young woman apologizes to a neighbor for calling her Karen and when she learns that her name is actually Karen, she says she’s sorry that her name is Karen.

The last one to say he’s sorry for something is Schitt’s Creek actor and co-creator Dan Levy, who’s also giving a bag of M&M’s as an apology to someone who it turns out is Ms. Brown, who is sitting at a table together with Ms. Green M&M. “I promise I will not eat any more of your friends,” he tells them, but that might not be true since Red is yelling inside a car parked behind him.

“The goal of the spot is just about connecting people and finding ways to bring people together,” Levy, who most recently appeared in the holiday rom-com “Happiest Season,” said in a press statement at the end of last week about the ad, which he described as “funny and sweet”.