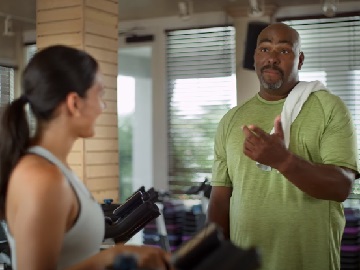 Mint Mobile promotes the Bobby Bonilla Plan in a new commercial, featuring the baseball legend himself.

The spot features a couple at the gym, spotting Bobby Bonilla and asking him about his secret for looking and feeling great. “Extremely long deals,” Bonilla answers, informing the man – who’s willing to know if he can get an extremely long deal, too – that he can at Mint Mobile. “25 years for just $100/year,” he mentions, which makes the woman declare that “it seems really fiscally irresponsible of them”. “It does,” Bonilla says before heading out.

The commercial ends with the voiceover (Ryan Reynolds) confirming that, for one day, everyone can get 25 years of premium wireless for just $100 a year.

The limited-time deal was valid for new customers only, though (the existing ones being excluded), on July 1st.

The budget wireless carrier has been promoting its plans and deals in numerous ads. Ryan Reynolds, who purchased an ownership stake in the company in November 2019, starred in some of them and one included a cameo appearance from Gary Busey.