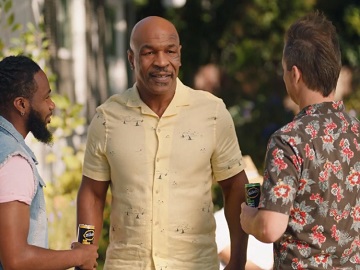 One of the commercials, part of the brand’s new “It’s Mike’s” campaign, developed by WorkInProgress, features the boxing legend at an outdoor gathering, intimidating one partygoer who grabs the last Mike’s Hard Lemonade Seltzer from a cooler. The latter praises the drink, saying that it’s crisp and refreshing, but when he learns that Mike (Tyson) brought them for the party, he gets intimidated.

The spot ends with the tagline “Nobody makes Lemonade like Mike’s” flashing across the screen and with a can of Hard Lemonade Seltzer, which is gluten free, has 100 calories and 1g of sugar.

The campaign debuted on March 14th and includes a significant presence at The Grammy’s, March Madness, and the NBA.