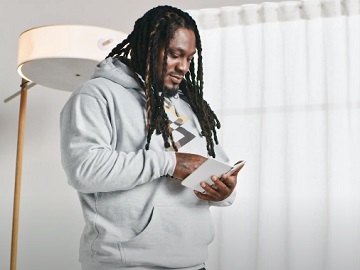 Microsoft has enlisted Marshawn Lynch to star in its campaign for the Surface Duo. The latest spot released by the brand highlights that you can check things off your to-do list faster than ever, just like Marshawn Lynch.

The ad sees the former NFL running back arriving on set (which is a living room), but not listening to the director’s instructions. He just grabs the dual-screen mobile device and does what he needed to do, namely to email his banana bread recipe to his mom. He immediately completes his “task” by dragging the file as an attachment and ticks off the task on his Tasks List. As he does that, he also ticks off the “Shoot video for Surface Duo” task and leaves the room, without paying attention to the production team.

“Do you To-Dos” an osncreen line reads at the end of the commercial, which also sees the tagline “Surface Duo. Do one better” flashing across the screen, along with the device, while in the background the 1988 hit single “It Takes Two” by New York hip hop duo Rob Base and DJ E-Z Rock plays.

This is not the first Microsoft Surface ad featuring Lynch. In a previous one, he’s using the Surface Duo to look at food on two screens at once. He’s pairing Pinterest and Microsoft Edge together to open side-by-side and looks at a combination of mac’n’cheese and shrimp and grits for his feast.

Surface Duo introduces revolutionary new ways to use a mobile device thanks to an innovative 360° hinge, two screens, and apps that seamlessly work together. It features the best of Microsoft 365, every Android app in the Google Play store, phone calls, and more.

It is available for purchase at Microsoft website starting at $46.67/month or $1,399.99. It will work on AT&T, T-Mobile and Verizon networks including subsidiary and international partner networks.