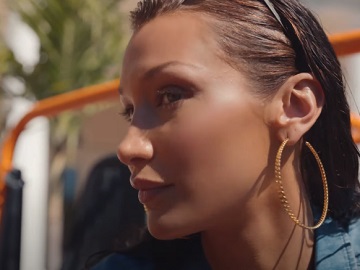 Michael Kors has launched its Summer 2021 campaign, which was inspired by legendary editor and fashion icon Diana Vreeland’s famous saying, “the eye has to travel”.

Filmed on location at The Ocean Club, A Four Seasons Resort, the 90-second spot opens with Bella Hadid driving a Moke vehicle to the Four Seasons Resort, where she rocks pieces from the summer collection at the pool and on the beach, while taking a walk and enjoying a cocktail in the sun.

The brand’s line-up for the upcoming season includes casual-cool separates and dresses that make it easy to mix and match, featuring a monochrome logo which is equal parts sporty and polished, tank dresses, embossed accessories, and the SoHo bag, which makes a splash in a rainbow of hues from rose to clementine to optic white.

The song used in the commercial is “Spill The Wine” by Eric Burdon & War.

The brand’s Spring Summer 2021 campaign, which carried the same name, was produced on location in New York City, with photography by Jason Kim and video direction by Matty Peacock. Bella Hadid starred in a short film along with Mayowa Nicholas, Heejung Park and Salomon Diaz, taking viewers on a journey across New York, to some of its most iconic places, from the Empire Diner to The American Museum of Natural History, to Central Park and the New York Harbor.