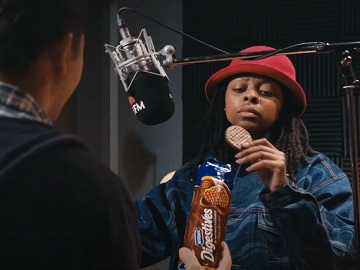 The spot, part of the brand’s “Too Good Not To Share” campaign, created in partnership with TBWA, features TrueMendous ready to kick off a live lounge gig on the radio when an assistant grabs a pack of McVities and insists she has one, too, because it’s “too good not to share.” Radio listeners have thus the chance to wear TrueMendous’ reaction after she eats a McVities biscuit and they are all surprised.

The “Too Good Not To Share” campaign, which debuted in 2020, includes another spot in which a gamer is ignoring his online multiplayer game to eat McVities with his younger sister, despite him not initially wanting to be disturbed.
“McVitie’s has been connecting people through biscuits for over 18 decades, and we wanted to celebrate the fantastic McVitie’s taste – which has made McVitie’s chocolate Digestives the Nation’s Favourite – the unique magic of the brand which has always been able to bring people together, no matter what else might be going on in the world,” Caroline Hipperson, UK&I Chief Marketing Officer at Pladis, which owns McVities’s, said in a press release.

Truemendous, one of the UK’s promising upcoming lyricists, also appeared in Pepsi’s Christmas campaign last year, along with Kamakaze.