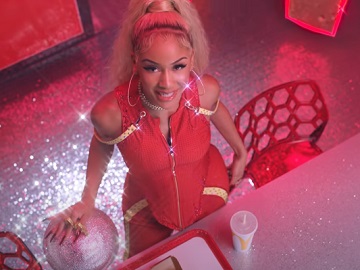 McDonald’s has released a new ad to promote the Saweetie Meal.

The rapper presents the meal carrying her name, which includes a Big Mac, 4pc Chicken McNuggets, World Famous Fries, and an icy Sprite, with Sweet ‘N Sour and BBQ sauce.

However, she also has a series of suggestions allow you to try new combinations with classic menu items, such as adding fries and sweet-and-sour sauce to the Big Mac, layering nuggets and fries with barbecue sauce, and making a chicken-nugget sandwich.

Saweetie’s meal launched on August 9 and costs $11.39, without tax.

McDonald’s “Famous Orders” collaboration also includes collaborations with J Balvin, whose meal, released in October 2020, included a Big Mac, medium fries with ketchup, and an Oreo McFlurry, Travis Scott, and BTS. Saweetie will also be releasing merch that accompanies the meal in the coming weeks.