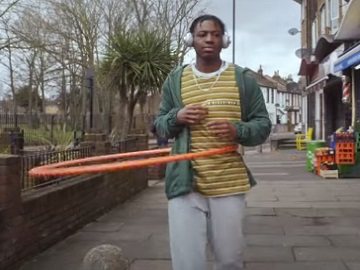 Lucozade Energy has launched a new TV spot, which marks the first campaign by adam&eveDDB for the brand.

The ad, which aims to capture the feeling of when you have just had a Lucozade and you are ready to take on anything, features a man hula hooping all the way home after grabbing a bottle of Lucozade Energy and drinking it till the end. At the traffic light, in the park, where a poodle also does some spins when seeing him, the young man gets everyone’s attention thanks to his amazing skills, as well as to his outfit, which is completed with flip-flops.

“Lucozade. When you’ve got one, it’s on!” the voiceover says.

The song used in the ad is the 1995 single “Here Comes the Hotstepper” by Jamaican reggae artist Ini Kamoze.

Lucozade Energy has relaunched its 250ml slimline can range with a sleek new design, created by BrandMe.