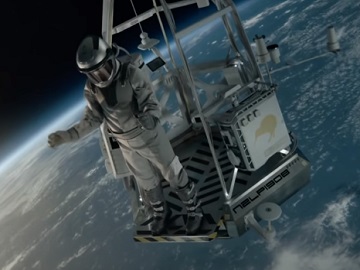 The commercial, created by DDB Aotearoa and titled “Space Manu,” (note: a manu is an iconic New Zealand-style cannonball), features a young man in space who takes off his spacesuit while falling on Earth. During his freefall, the “astronaut” strips down to his shorts and eventually lands in the local community pool, where his friends are not very impressed, though, by his jump from space. “Pretty good” they say sipping on L&P.

“L&P’s Drink Chilled platform speaks to Kiwis’ ability to remain pretty unphased and chilled no matter what’s going down. We see this in our hero throughout the TVC, and we see it in the deadpan reaction from his mates.

L&P is an icon in New Zealand and has always been quintessentially Kiwi, so we’re thrilled to launch our first chilled story, that couldn’t be truer to who we are as people, and conveniently, how we like to drink our L&P,” said Angela Broad, head of marketing and design L&P, in a press statement.