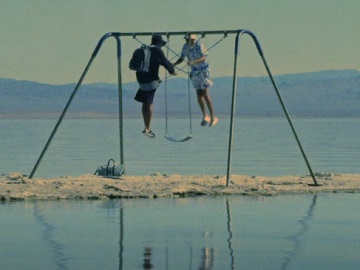 The spot, filmed on the side of Venice Beach and directed by Virgil Abloh, showcases some of the pieces included in the collection, which was inspired by West Coast skaters and artists and brings bright hues that emulate the ever-changing colors of the summer sky, focusing on three moments in time: dawn, afternoon, and dusk.

The collection, launched on March 19, features trousers, sneakers, duffles, embroidered shirts, jacquard blazers, light leather jackets, colored windbreakers, cross-body bags, suits, hoodies, crewnecks, outerwear, jewelry, and more. 21 Savage rocks some of the pieces which introduce a revisited watercolor Monogram in shades of indigo, blurred as if drops of water had fallen on ink, as well as a watercolor Monogram in a rainbow of colors.

The soundtrack is provided by 21 Savage’s single “Close My Eyes” featuring Metro Boomin.

According to the brand, which aims to have all of its products with an eco-design strategy by 2025, some of the pieces included in the new capsule collection have environmentally-conscious designs.