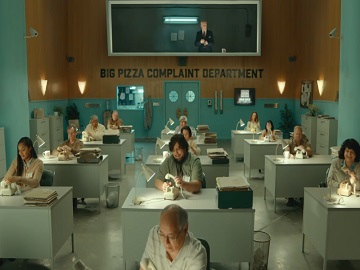 Little Caesars has released a new ad to announce that its Pretzel Crust is back and for just $6.

The 30-second spot, the latest installment in the chain’s “We’re not Big Pizza. We’re Little Caesars” campaign, is titled “Complaint Department” and features call-center employees in the Complaint Department of the Big Pizza corporation, which believes that an unanswered call is no complaint at all. Thus, the workers getting hundreds of calls per minute, pick up the phone but they immediately hang up, as trained by their leaders. They also talk about the fact that Little Caesars brought their Pretzel Crust pizza back following customers’ request, surprised that this chain actually listened to their customers.

“We’re not Big Pizza. We’re Little Caesars. And Pretzel Crust is back with a cheddar cheese sauce and a soft pretzel crust for just $6,” the voiceover says at the end of the commercial.