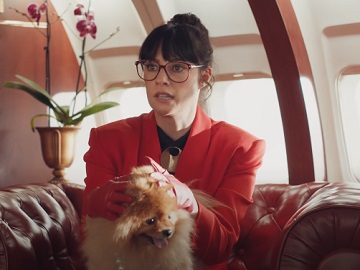 The spot continues the chain’s “We’re not Big Pizza, We’re Little Caesars” campaign and features some of the Big Pizza executives on a private jet, talking about the Little Caesars’ ExtraMostBestest Thin Crust Pepperoni Pizza. An eccentric lady, who’s holding a puppy in her lap, explains to her colleagues that the toppings of this pizza go all the way to the edge and a man points out that it’s just $6.49. At this point, another man says “We could do that if we want to fly commercial”, which makes everyone around him burst into laughter, except the woman, who covers her dog’s ears, telling him to not listen to that mean man.

The pizza chain has released several ads so far featuring executives of the Big Pizza corporation, which does not care about the quality of their pizza or the customers’ feedback. One of the spots, which announced the return of the Pretzel Crust (featuring cheddar cheese sauce and a soft pretzel crust) showed the Big Pizza’s Complaint Department, where the employees hang up the phone because the company believes that “an unanswered call is no complaint at all”.