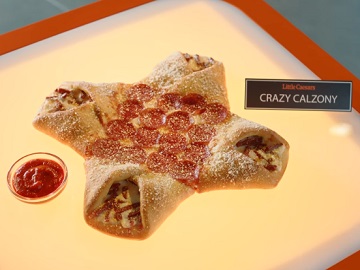 Little Caesars promotes its new Crazy Calzony, which is a combination of a pizza and a calzone, in a new commercial.

The spot features several Big Pizza employees in the Big Pizza “Innovation” Lab taking a look at Little Caesars’ new menu item – a pepperoni pizza surrounded by a calzone crust – and stating that Little Caesars got them again. “Is it more pizza or more calzone?” one of them asks, while taking a piece, ready to taste it. They turn to their pizza bot, who tries to name the menu item but, after several attempts, gets broken. However, before falling to the floor, he asks the scientists to deliver a message to his wife from him, namely “Bleep Bloop”.

“We’re not Big Pizza, we’re Little Caesars,” the voiceover says at the end of the commercial, presenting the new Crazy Calzony.

The new Crazy Calzony, which is a pepperoni pizza split into four corners of calzone crusts stuffed with garlic white sauce and mozzarella cheese topped with pepperoni and a sprinkle of parmesan cheese, is now available Hot-N-Ready at Little Caesars for $8.49, from 4-8 PM or online for Pizza Portal pickup and delivery.