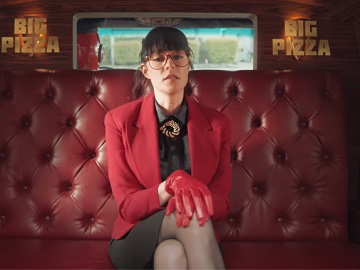 The spot features two representatives of one of Little Caesars’ competitors getting into a car parked near a Little Caesars restaurant, with the chain’s new Pepperoni and Cheese Stuffed Crust Pizza to review it and try to steal the idea. They notice that it’s got lots of pepperoni and the crust is brushed with a buttery garlic sauce and sprinkled with parmesan. However, they soon realize they are caught in “a pepperoni ambush” when they notice the cheese and pepperoni stuffed crust. The man gets angry and throws away his wig and the aliens listening the conversation can’t help uttering a “Noo!”.

“We’re not Big Pizza. We’re Little Caesars. The new Pepperoni and Cheese Stuffed Crust Pizza just $10,” the voiceover says at the end of the commercial.

This is only the latest installment in the chain’s “We’re not Big Pizza, We’re Little Caesars” campaign. A previous one features some of the Big Pizza executives on a private jet, talking about the Little Caesars’ ExtraMostBestest Thin Crust Pepperoni Pizza.

The pizza chain has released several ads so far featuring executives of the Big Pizza corporation, which does not care about the quality of their pizza or the customers’ feedback. One of the spots, which announced the return of the Pretzel Crust (featuring cheddar cheese sauce and a soft pretzel crust) showed the Big Pizza’s Complaint Department, where the employees hang up the phone because the company believes that “an unanswered call is no complaint at all”.