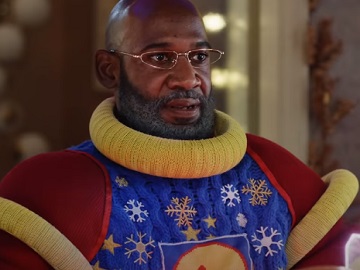 Lidl highlights that they will always be “big on quality” and “Lidl on price” in its Christmas 2021 advert.

The spot opens with a family gathering on Christmas day. A man gets a nicely roasted free-range British Turkey out of the oven and takes it to the table, where the family members enjoy a feast with Lidl’s festive food range.

Deluxe Pigs in Blankets and Crémant de Loire, new for this year Vegan Garland, are also showcased. One of the characters wears the new 2021 Christmas jumper (and what it might look like in years to come), worn by one of the characters.

The ad then continues with the same scene, but set in other two different decades in the future. In one of them, the man bringing the turkey to the table uses a laser to cut the turkey and some of the family members, who in the first scene were back home from Spain, are now back to Earth from the Moon, where they are currently living, apparently. The final scene shows the same family gathering, but even further into the future, which might held for humanity cameras controlled by eyes, levitating plates and even talking dogs.

Throughout the advert, which is set to Brenda Lee’s “Rockin’ Around the Christmas Tree,” one of the characters wears the Lidl’s new 2021 Christmas jumper and various other versions of what it might look like in the years to come.

Eventually, the voiceover points out that, even when “we’re carving turkeys with lasers, we’ll always be Lidl on price”, demonstrating its commitment to always give shoppers a Christmas they can believe in.