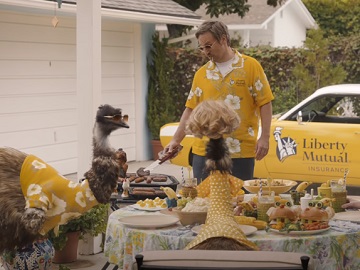 The two fellows are enjoying a bright sunny day grilling up lunch in the yard, with Doug sharing a story in which he told someone that he had to customize his car insurance with Liberty Mutual so he only pays for what he needs. His wife reminds him that it’s weekend and suggests they talk about something other than work, which puts Doug in difficulty as it appears he doesn’t have something else to say. After declaring that weekends are a lot like insurance, he asks LiMu if he wants hot dog or chicken.

“Only pay for what you need” the voiceover says at the end of the 30-second spot.

Doug and LiMu Emu are featured in several other ads for the Boston-based insurance company, developed by creative agency Goodby Silverstein & Partners (GS&P) and directed by Australian director Craig Gillespie, spreading the word about its customized coverage. In one of them, they hit the open road together, in a sidecar. In another one, while Doug shares customization tips with a young couple on the sidewalk, LiMu Emu encounters an unexpected adversary in his own reflection. Another spot sees Doug looking at the pictures of completely different people stuck on his clue board and concluding that they need customized car insurance from Liberty Mutual so that they could only pay for what need, and save money, as well. Another spot features Doug pulling out all the stops to ensure a civilian who’s buying a new car only pays for what she needs.