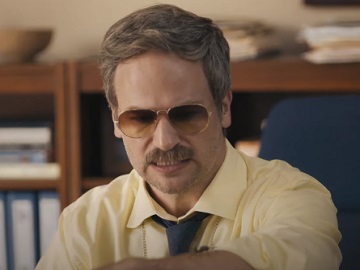 Liberty Mutual has released a hilarious new commercial starring LiMu Emu and Doug. This time, inspired by Spider-Man, Doug wants to get superpowers, but he manages to get himself transported to the hospital.

The spot opens with a scene featuring Spider-Man saving the city as it runs on TV. Doug is watching the news from his office and, having a spider in a box near him, can’t help from wondering if he could also get superpowers from a spider bite. Arguing that he could use some help showing the world how Liberty Mutual customizes their car insurance, so they only pay for what they need, he takes the spider out of the plastic box and lets it bite his hand.

It turns out things don’t end well for Doug. The next scene shows him with his face swollen, being carried to the hospital in a litter.

The commercial ends with the voiceover saying the tagline “Only pay for what you need” and with the Liberty jingle.
Doug and LiMu Emu are featured in several other ads for the Boston-based insurance company, developed by creative agency Goodby Silverstein & Partners (GS&P) and directed by Australian director Craig Gillespie, spreading the word about its customized coverage.

In one of the latest, Doug and LiMu hit the gym, where Doug tells a man that Liberty Mutual’s Coverage Customizer Tool finds discounts and policy recommendations so you only pay for what you need. In another one, the two partners spend a bright sunny day grilling up lunch in the yard with their wives. Doug’s wife, however, politely asks him to talk about something other than work, which it turns out is quite a challenge for him. In another spot, the two fellows hit the open road together, in a sidecar. In another one, while Doug shares customization tips with a young couple on the sidewalk, LiMu Emu encounters an unexpected adversary in his own reflection. Another spot sees Doug looking at the pictures of completely different people stuck on his clue board and concluding that they need customized car insurance from Liberty Mutual so that they could only pay for what need, and save money, as well. Another spot features Doug pulling out all the stops to ensure a civilian who’s buying a new car only pays for what she needs.