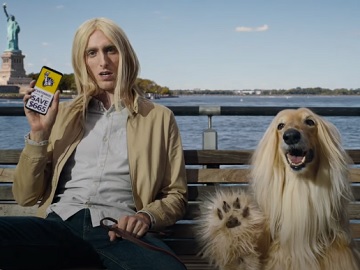 Liberty Mutual has released a new hilarious commercial to highlight that the company customizes your car insurance so you only pay for what you need.

The spot features a man who resembles his dog, an Afghan Hound, and says that he appreciates Liberty Mutual for customizing car insurance based on every individual’s needs.

“As someone who resembles… someone else,” the guy says, looking at his furry friend, “I appreciate that Liberty Mutual knows that everyone’s unique. “That’s why they customize your car insurance, so you only pay for what you need,” explains the young man, adding that “‘case you look like someone else, doesn’t mean you eat off the floor or yell at the vacuum or need flea medication”. However, as he says this last thing, he scratches behind his ear just like his dog.

The commercial ends with the voiceover saying the tagline “Only pay for what you need” before the Liberty jingle is heard.