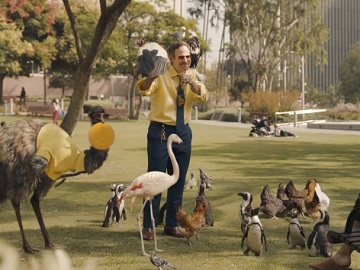 The spot features Doug telling a woman sitting on a bench in the park that it’s easy to customize her insurance at libertymutual.com so she only pays for what she needs. When he asks for LiMu’s confirmation, the bird is nowhere is nowhere to be seen. Doug uses a bird whistle to call him, but he manages to get himself surrounded by all kinds of birds, including an owl, penguins, and a flamingo, until he finds the right whistle to call his partner.

The commercial ends with the voiceover saying the tagline “Only pay for what you need” and with the Liberty
jingle.

LiMu Emu and Doug have appeared in numerous ads over the years for the Boston-based insurance company.

In one of the ads, Doug and LiMu hit the gym, where Doug tells a man that Liberty Mutual’s Coverage Customizer
Tool finds discounts and policy recommendations so you only pay for what you need. In another one, the duo spend a bright sunny day grilling up lunch in the yard with their wives. Doug’s wife, however, politely asks him to talk about something other than work, which it turns out is quite a challenge for him. In another spot, LiMu Emu encounters an unexpected adversary in his own reflection.

LiMu Emu was brought to life with the help of visual effects and content creation studio The Mill, which used
cutting-edge CGI technology, including a proprietary fur and feather system.