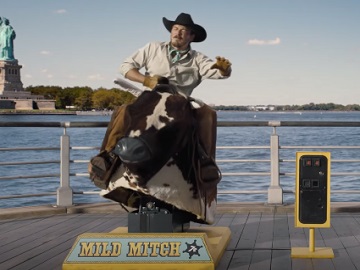 Liberty Mutual has released a new commercial to highlight that it customizes your car insurance so you only pay for what you need.

The 30-second ad features a bull rider who says that, as a professional bull-rider, he’s used to taking chances, but when it comes to his insurance, he doesn’t. He declares that he uses Liberty Mutual because they need your car insurance so you only pay for what you need, and by switching you could even save $665.

As the spot ends, it turns out the bull rider is actually on a Mild Mitch for kids. One girl asks him actually if someone else can get a turn.

The voiceover says, at the end of the video, the tagline “Only pay for what you need” before the Liberty jingle is heard.

Other similar ads feature a man who resembles his dog, an Afghan Hound, and acts like him, a man who seems to be a hot dog vendor but who actually sells wet teddy bears, and a trio of jump roping kids who count how much money Liberty Mutual can save you until they become tired old people.