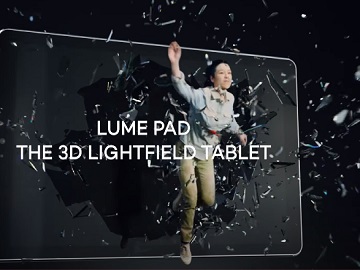 The spot, directed by Emmy Award winner Ulf Johansson and set to Bruno Coulais’ Oscar nominated music for the French movie Les Choristes, features a woman and a man chasing each other across a house, breaking through the walls, dropping through ceilings and running on water. As the commercial ends, it turns out the couple were playing a game of tag.

Leia’s new “Breakthrough” campaign has been developed in partnership with film production company Smith and Jones, Whitehouse Post, and MPC.

The Lume Pad, which won innovation recognition at CES 2021, is a high-performance Android 10.8-inch tablet which which uses groundbreaking nanotechnology to enable the creation, sharing, and viewing of photos, videos, apps, games, and other content in 3D visible to the naked eye. Besides supporting all the apps and features of a premium tablet, it projects images in true 3D off – and deeper into – the screen, and also makes 2D and 3D apps and games a more immersive experience.

The device launched for consumers on the brand’s website, on Amazon, and at select B8ta stores across the country for a suggested retail of $649.00 USD.