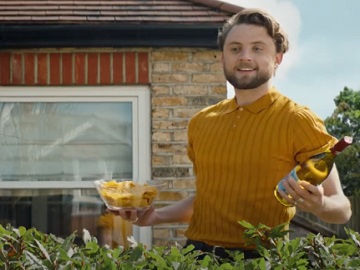 UK’s number one online wine retailer, Laithwaite’s Wine, has launched a new ad campaign, created by agency RAPP UK, which takes a jab at the stuffiness of wine culture.

The TV spot, set a garden BBQ, features a young man who pretends to disappear down an imaginary staircase and returns with a bottle of Laithwaite’s Wine. The two women watching him obviously have mixed feelings about his “performance”. Eventually, they all get around the table to enjoy their barbecue and a glass of wine.

“Get that wine cellar feeling,” the voiceover says at the end of the 30-second advert.

The campaign, which marks the brand’s re-fresh, also includes digital and social activity, as well as supporting direct communication.

However, this is not the first ad which illustrates the idea of customers pretending to walk downstairs to an imaginary wine cellar and confidently back up with a bottle from Laithwaite’s. The “Get that wine cellar feeling” campaign, created by RAPP UK (the first one by the agency since appointed for the brand), has been built around the same idea and included four similar spots.

Previous: Verizon No One Should Be Left Behind Environment Commercial Song
Next: 76 Jean & Gene’s Road Trip Jean’s Fear – Turkeys Commercial