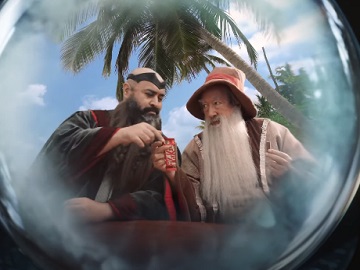 KitKat has enlisted Australian screen legend Michael Caton for its latest ad campaign, which aims to remind consumers what a difference a break makes when life’s little frustrations are getting to you.

The spot features Caton as a wizard who’s trying to have a sort of Zoom conversation with another wizard, played by Miritana Hughes. However, the latter is on mute and keeps talking, to the frustration of Caton. The spirits gets heated but Caton’s character immediately gets into a good mood after eating a piece from a KitKat bar.

The remote meeting miscommunications is not the only topic approached in the campaign, which launched Sunday across broadcast, digital and social. Other ads tackle the lack of space sharing at home and losing it when you’re locked out.

The digital and social 6″ iterations of the campaign have been created in partnership with UM and Google, using Google Life Events to correlate digital executions with events in Australians lives.

The brand, which is the leading chocolate bar in Australia, according to Kantar’s brand health tracker, is also known for its 2019 western world “Maps” and 2017 medieval “Katapult” campaigns.