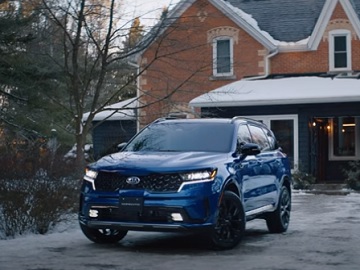 Kia Canada showcases the boldly reimagined 2021 Sorento in a new commercial, highlighting that this SUV has everything you need to make every drive more thrilling than the last, even those drives you weren’t expecting to take.

The spot, titled “Back to the City,” features a young man who, after receiving a meeting update notification on his
smartphone, informing him that his scheduled conference call had been changed to in-person, rushes out of his house
and gets at the wheel of his Sorento. He drives back to the office, where it turns out he’s wearing rain boots.

“You’re gonna change, right?” a colleague asks him as they enter the building. “Change, what for?” he asks in
return? throughout the ad various car features are highlighted, such as the available 281 horsepower turbo engine, the interior, and the available blind-spot view monitor.

The song used in the ad is the 2018 single “Run Wild” by Thutmose feat. NoMBe. The track, which was featured in the 2018 EA Sports FIFA World Cup, is available for purchase on Amazon for $0.99.