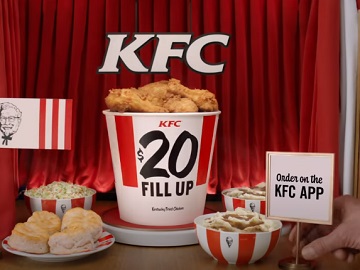 KFC promotes its $20 Fill Up in a new commercial, highlighting that you can have a family banquet.

The spot features a KFC meal emerging from a retro television set, while Colonel Sanders says in voiceover that you’ll get a family banquet for $20 with his KFC $20 Fill Up, mentioning that this includes eight pieces of fried chicken, tasty sides, and four fluffy-biscuits.

“It’s like a home-cooked meal you don’t have to cook,” he also adds at the end of the commercial.

Sides included are 2 Large Mashed Potatoes and Gravy, Large Cole Slaw. Consumers willing to customize their sides can try a Bucket Meal. Menu items can be ordered in the KFC app.