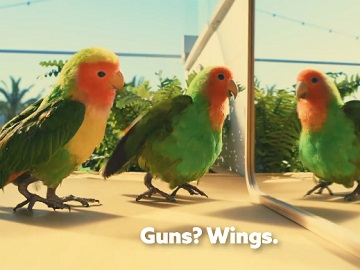 Just Eat, the sponsor of Love Island, has launched a new ad campaign to mark the return of the reality dating show to the screens.

Titled “Get Stuck In” and created by McCann London, the campaign includes several 15-, 10- and 5-second spots narrated by Love Island voiceover Iain Stirling and set to run across TV, VOD and social.

One of them features two parrots – Izzy and Lloyd – who look at themselves in the mirror. While Lloyd asks his lovebird, Izzy, to look at those “guns”, the latter points out that those are wings, teeny, tiny wings, actually. The conversation goes on like this for a while, until the voiceover urges viewers to get stuck into Love Island with Just Eat.

Other characters in the campaign are geckos Gaz & Oz. Voiced by British rapper, singer and songwriter Lady Leshurr and stand-ups Inel Tomlinson, Tez Ilyas and Jamali Maddix respectively, they will all commentate on the events taking place on the island and the drama between contestants.

“Love Island is finally here and Just Eat is set to help fans get stuck in. As the food delivery sector continues to mature, it’s increasingly important to remain culturally relevant, converting our strong brand awareness into consideration and preference – Love Island enables us to do just that. As fans tune in in their droves, we hope our loveable geckos and lovebirds amplify the joy of indulging in the much-anticipated return of the show,” said in a press statement Matt Bushby, Just Eat Takeaway UK marketing director.