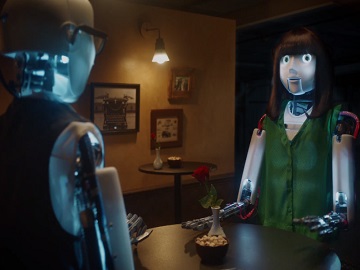 Jose Cuervo has a friendly reminder for people: to not date like a bot and date more human instead.

“Our dating app conversations have become more bot-like than ever so we sent two real AI chatbots on a date. Their conversation sounded all too familiar,” the brand informs in the opening of the 90-second spot, from agency Mekanism, which features the two robots on a date in a bar. Their conversation is quite awkward, with forced laughter and priceless facial expressions. “I am single and ready to mingle,” the male says. He lists the music genres he likes and when asked if he likes salsa, specifies that he likes salsa, the food, not the dance.

“You’re not a bot. Don’t date like one,” an onscreen line reads at the end of the commercial.

David Horowitz, Mekanism’s partner and executive creative director, said in a press statement that the brand aims to “create faster bonds and more honest conversation between people over a drink,” and that “There’s no one better to champion bringing some unscripted humanity into the dating process than Cuervo, who believes ‘There are no strangers”.