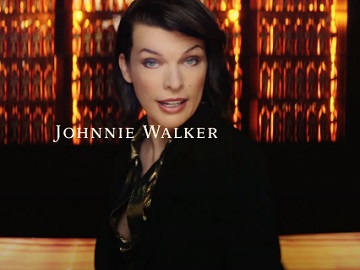 Johnnie Walker has teamed up with Milla Jovovich for a new ad campaign. The award-winning actress stars in a commercial that aims to inspire people to keep walking.

“I could tell you about my life, but just like Johnnie, I prefer to walk, push boundaries, celebrate milestones, and keep on moving.

Thinking of doing something? Stop thinking!” Jovovich says, raising a glass of Johnnie Walker and adding “Here’s to less talking”.

The campaign has been created by agency Dept and is set to run on TV, digital, social and out-of-home in 14 countries across Eastern Europe. Jessica Otero Ely, Account Director, Dept, described Milla as “the perfect ambassador”, saying that “She embodies the core inspiration for the creative direction of the campaign; the tenacious, resilient, and action-orientated spirit of Eastern Europe”.

João Inácio, Associate Creative Director, Dept, said that “The campaign idea stems from a very powerful insight that ties in brand, region, Milla and our audience together perfectly.” “Actions talk louder than words and Milla, just like Johnnie, is the perfect example of someone who lets the walking do the talking,” he added in a press statement.