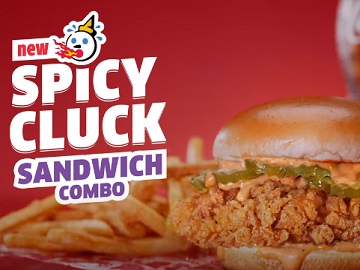 Jack in the Box promotes its Spicy Cluck Sandwich in a new commercial.

The spot opens with a guy asking Jack how he got the new Spicy Cluck Sandwich have the perfect amount of spice. The brand’s mascot says he calls it “Jack Spicy Squad”, but it turns out the squad has only one member: him.

The 15-second ad concludes with Jack urging viewers to try his new Spicy Cluck Sandwich Combo and adding that it’s his best chicken ever.

The Spicy Cluck Sandwich is made with a 100% all white meat chicken fillet that is “bigger, crispier and better than ever,” topped with thick crinkle cut pickles and Jack’s Good Good Sauce on a toasty brioche bun.

Ryan Ostrom, chief marketing officer of Jack in the Box, said in a press statement “Our fans wanted us to bring the spice… so we did. At Jack, we believe spice makes everything better, especially chicken, and we’re excited to debut our new Spicy Cluck Sandwich and even spicier Blazin’ Cluck Sandwich”. “Spice isn’t just a flavor profile, it’s a passion and attitude – something we know quite a bit about at Jack. Our fans will taste that passion and attitude in each bite. We really focused on including authentic, craveable ingredients from the breading to the Good Good sauce and know our fans will love it,” he also said.