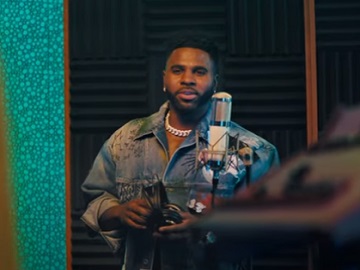 Jack in the Box and Jason Derulo have teamed up for a new ad campaign dedicated to the latest additions to the chain’s menu, including Triple Bacon Cheesy Jack, Chocolate Croissant Bites, and Roost Fries.

The spot focusing on the last one features Derulo in the recording studio, singing a song but being interrupted by Jack, the brand’s mascot, who says that this song is gonna make his Roos Fries famous. He then asks the musician to wear a French fry-shaped costume. The latter refuses to put that on, but eventually he does wear it and sings “All I want is Roost Fries”.

The Roost Fries are covered in crispy chicken, melty cheese and drizzled in a mystery sauce. Customers can also get them with jalapeno slices and a spicy mystery sauce.

The menu items are available at participating Jack in the Box locations nationwide for a limited time.