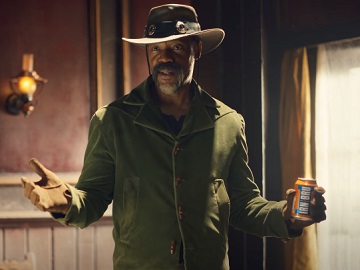 IRN-BRU has launched a new ad campaign, titled “Let’s Just Agree”, which tackles the age-old question of what the soft drink actually tastes like.

The spot, set in the Wild West, features a bar brawl, with people fighting over the taste of the popular orange coloured drink. Some say it’s orangey, others say it’s tingly, tutti-fruity and more. Descriptions like bubblegum, cream soda and are also mentioned. Eventually, peace is restored by one cowboy who shows up with a gun and declares that it “tastes magic”.

The advert, released on July 13, also marks a UK-wide challenge, called “The Great Taste Debate”, which encourages fans to grab a can of IRN-BRU, put their taste buds to the test and pinpoint its “BRU-nique flavour” via social media.

Goggleboxer Tom Malone Jnr, Yorkshire Peach and Demi Yates have had their say on the #IRNBRUChallenge by posting videos on TikTok. The company will give one lucky fan a year’s supply of their legendary fizz for the best tried-and-tasted video.