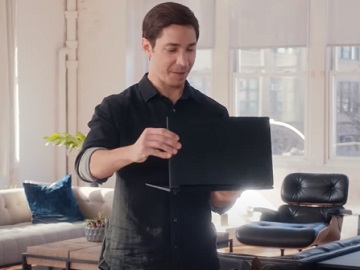 Justin Long has been enlisted by Intel to promote Lenovo’s 9i 2-in-1 laptop.

The actor stars in a series of ads titled “Justin Gets Real” and, in one of them, shows us the difference between the Lenovo​ Yoga 9i and Mac. He opens the commercial by introducing himself as “a Justin,” “just a real person doing a real comparison between Mac and PC.” He then grabs the Lenovo Yoga 9i, which is both a laptop and a tablet, allowing users to enjoy more flexibility. He then gets burried in a pile of Apple equivalent, including a laptop, a tablet, a keypad, a stylus, and a dongle.

Lenovo’s 9i 2-in-1 laptop tops the brand’s high-end Yoga lineup. Refreshed from its C940 predecessor, the device has full touchscreen, in brilliant 4K and OLED options and new AI-based content creation tools from Topaz Labs, which perform up to 3.5x faster with the new 11th Gen Intel Core mobile processors than on an M1 Mac, according to the brand.

Justin Long has once been the face of Mac. The actor starred in Apple’s “Get a Mac” campaign, created by TBWA\Media Arts Lab, which ran from 2006 to 2009, as “the Mac” alongside author and humorist John Hodgman, who portrayed the PC.