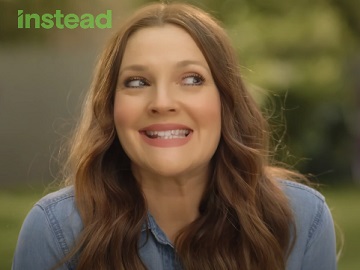 Instead has launched a new ad campaign, titled “Natural Way to Lawn”, in partnership with agency Three Foot Giant.

The campaign stars Drew Barrymore saying she chooses instead because it’s a natural type of lawn care. “I am always looking for a new alternative. A natural choice. Paper instead of plastics. Sunlight instead of screen time.

Making my lawn a living room instead of a museum. So I choose instead instead. Instead is a new type of lawn care that’s natural, really hard to mess up and deliver just when I need it,” the actress, who also serves as instead’s Co-Chief Creative Officer, says in the 30-second commercial.

“It’s a better way to lawn,” Barrymore says at the end of the commercial, while an onscreen line urges viewers to order at chooseinstead.com.

According to the brand, its fertilizers, delivered directly to your door, contain only natural ingredients, including molasses, wheat flour, feather meal, blood meal, nitrogen, alfalfa, soybean meal and more, which provide optimal nutrients to lawns. Sustainable bags are made of 25% braskem (a bio-based plastic made from sugarcane), and shippers are 100% recyclable.

The campaign launched on March 18, 2021 and runs across instead’s digital channels, YouTubeTV, Hulu, podcasts, and all major social media platforms.

Tags: Instead Commercial, Instead Drew Barrymore