Home / Food & Drinks / IHOP We Could All Use a Pancake Commercial 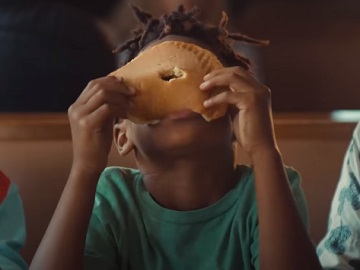 IHOP’s latest campaign, launched earlier this year, in June, and aimed at bringing people back into its restaurants after 18 months at home, celebrates its pancakes and their power to put a smile on consumers’ faces.

The spot “We Could All Use a Pancake,” titled just like the campaign, features a diverse cast of people in an IHOP restaurant, enjoying the pancakes they love. While some of them grab one pancake or two with some butter, others are opting for ten. While some of them go for pancakes with omelets, others order pancakes with burgers and fries, or burritos. Pancakes with faces are also among the orders placed by the IHOP customers, who are “parents who’ve been making their own pancakes,” “night owls who miss staying up till dawn,” “nosy neighbors” and “smooth operators”.

The commercial ends with the voiceover saying “Because right about now we could all use a pancake”.

For its “We Could All Use a Pancake” campaign, the restaurant chain has teamed up with Chrishell Stause from Selling Sunset and Dancing with the Stars, who shared her need for Pancake Support after her elimination from the dance show.

The campaign runs on IHOP’s owned social channels, on several influencer channels, as well as on television, streaming services and digital.