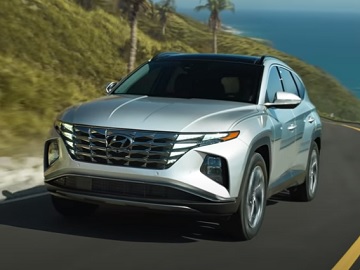 Hyundai has teamed up with a host of celebrities to promote the all-new 2022 Tucson. Jason Bateman, Mindy Kaling, Becky G., Kawhi Leonard, Giada De Laurentiis, and Nate Berkus ask life’s most perplexing questions in the automaker’s latest ad campaign, which is based on the idea that asking questions is at the heart of making things great.

“Questions are the key to making things great and we questioned every detail and assumption when developing the all-new 2022 Tucson. We used that as the creative hook in our campaign and had fun with our celebrity partners by asking some of life’s most thought-provoking questions. This is our most innovative and technologically advanced Tucson ever. The all-new Tucson will define our brand for the future. We are supporting it with one of our most creative and expansive marketing campaigns we’ve ever executed,” said Angela Zepeda, CMO, Hyundai Motor America.

“Why are there insterstate highways in Hawaii?”, “If you enjoy wasting time, is it really wasted?”, “Why does quicksand work so slowly?”, “Shouldn’t the word ambiguous have more than one meaning?”, “If there’s an exception to every rule, is there an exception to THAT rule?” “Why do they call it your funny bone?” are only some of the burning question.

At the end of the commercial, Hyundai designers are shown asking themselves the questions that led to Tucson redefining its segment.

The spot, which will be complemented by three 30-second feature-focused spots, airs during some of the most high-profile programming, including the NBA Playoffs and PGA Championship, on various streaming services and in major broadcast network and cable programming.