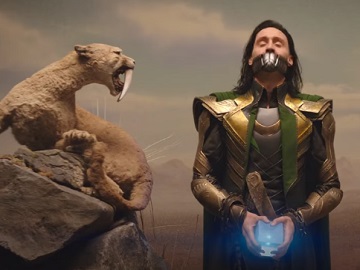 The spot features the character teleporting himself into a museum and them outside an office building, in a city.

He then gets at the wheel of a 2022 Hyundai Tucson Limited (with optional features shown), asking “If you’re living on borrowed time, do you have to return it?” He then drives away, and the voiceover says “Question everything. We did”, introducing the all-new Hyundai TUCSON.

The show, which sees the main character trapped in his own crime thriller, traveling through time and altering human history, premiered on June 9, 2021. Season 1 consists of six episodes.

For its “Question Everything”, the automaker has enlisted a host of celebrities, including actors Jason Bateman, Mindy Kaling, and Becky G., basketball star Kawhi Leonard, Emmy award-winning TV host Giada De Laurentiis, and celebrity designer and TV personality Nate Berkus. They star in the main spot, asking some of life’s most unusual and burning questions, such as “Why are there insterstate highways in Hawaii?”, “If you enjoy wasting time, is it really wasted?”, “Why does quicksand work so slowly?”, “Shouldn’t the word ambiguous have more than one meaning?”, “If there’s an exception to every rule, is there an exception to THAT rule?” and “Why do they call it your funny bone?”.