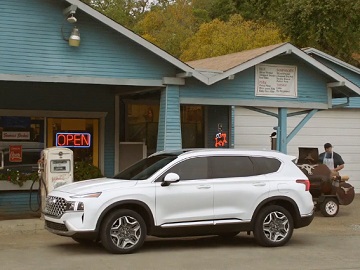 The spot features a family of four on a road trip with their 2021 SANTA FE Hybrid. When they pass by a gas station called Rossi’s, the daughter asks her dad if that wasn’t the place where they usually stop for gas. The man tells her that it’s where they used to stop, but they don’t need to do that anymore. At this point, the son involuntarily reminds his dad that Rossi’s was the place with the milkshakes, which makes the dad brake and turn around for a short stop there.

“Take your adventure further in the first-ever 2021 SANTA FE Hybrid,” the voiceover says at the end of the commercial.

The 2021 SANTA FE Hybrid, described as “a compact hybrid SUV built for new adventures,” delivers combined 265 PS of combined power output and an all-electric mode at the push of a button. The seven-seater, which is the first model in Hyundai’s European line-up to move across to the “third-generation” architecture, features all-wheel drive, a 10.25-inch touchscreen navigation system, electric heated mirrors, LED lights all round, heated front and rear seats and dual-zone climate control, as well as a suite of driver safety aids.