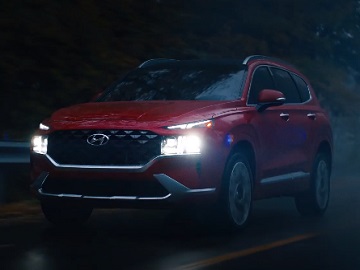 Hyundai Canada showcases the new SANTA FE and some of its SmartSense features in a series of new ads.

One of them focuses on the Standard Lane Keeping Assist with Lane Following Assist and shows a father who manages to avoid a collision thanks to this feature. The man is driving down a road, in the night, while his wife is sleeping and his two teenage sons are watching a movie on a tablet in the back seat. The problem is they are watching a horror movie and, when they get terrified and shout, their dad’s attention is distracted for a moment and loses control of the car. Luckily, the Lane Keeping Assist, which constantly monitors surroundings, turns on and gets the vehicle back to its lane just in time to avoid an accident.

“With Lane Keeping Assist, the new Santa Fe thinks of everyone’s safety,” the voiceover says at the end of the commercial, which also sees the two boys handing over the tablet to their parents.

The commercial is available also in French, in 15- and 30-second versions.