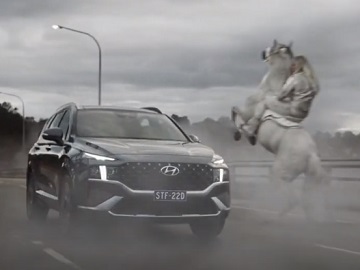 Hyundai showcases the 2021 Sante Fe in Australia in a new campaign, created by its newly transformed creative agency, Innocean Australia, which aims to position the new Santa Fe as “the perfect antidote to family chaos”.

The spot, titled “Little Angels” and directed by Michael Spiccia, opens with two siblings who can’t stop fighting after a football game, even though their parents, who came to pick them up with the family’s 2021 Hyundai Santa Fe, asks them to stop it. However, as the dad begins to drive, the kids calm down and turn into little angels, singing Enya’s “Orinoco Flow”. Their ride back home turns into a magical one, with a motorcycle courier transformed into a white horseman, a woman showing up from above, levitating, to wipe the “souvenir” left by a bird on their sunroof, a busload of elderly people who join the choir, and even harps appearing into their hands to accompany the song.

“New Hyundai Santa Fe. Peace at last.” an onscreen line reads at the end of the commercial.