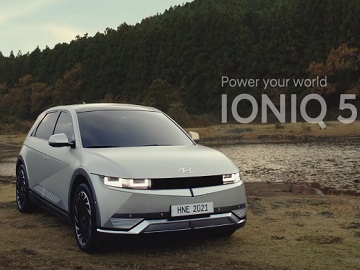 “Camping means being at the mercy of nature and living with no power. Well, not if you have the EV that redefines Electric Mobility lifestyle. ” This is the idea behind the latest commercial for the new IONIQ 5, introduced as “the EV that lets you power your world”.

The spot, titled “Ultimate Camping,” features a diverse cast of men in the middle of nature, using all kinds of appliances, from an electric oven to a fridge and more. A man working on his laptop in the backseat of an IONIQ 5 informs the voiceover, who believes you still have to charge everything before you leave the house, that you don’t have to anymore. Another one is cooking a chicken with roasted vegetables in an electric oven and runs on a treadmill, another one listens to his favorite music to several speakers, all to the voiceover’s surprise, who wants someone to explain to him what’s going on there.

The end of the commercial sees one of the men watching TV and promising the voiceover, who doesn’t understand how all of that is possible, that he will find out soon enough.

“Welcome to a whole new way of living. Powered by IONIQ 5.” an onscreen line reads at the end of the commercial,
which also informs that this vehicle to load provided general electric power (110V/220V) inside and outside the
vehicle.

The world premiere of the IONIQ 5, which was described by the automaker as the EV that combines customizable space and eco-friendly materials with outstanding technology and design, took place on February 23rd 2021. Online
reservations are open for selected EU customers since the same date.