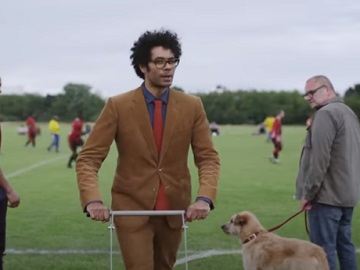 HSBC UK has enlisted Richard Ayoade to star in its latest campaign, which aims to highlight that, when you break down borders and see beyond them, you can see opportunity everywhere”.

The spot, created by Wunderman Thompson, features the British comedian using a traditional white line marker to create borders and underline issues within society around equal opportunities, such as racism and gender inequality. “Borders… can be useful, but not always. Glass ceiling – classic border. Political borders – very popular these days. Sometimes, the borders are within,” Ayoade says throughout the 60-second advert, which features him leaving a football pitch and walking his line marker across the glass ceiling of a large corporate building, through the living room of a family, during a fight between the parents and their teenage children, through a freshly painted “No Entry” road marking, across the stage at a major conference, and across a busy port. He eventually arrives at the “Land’s Edge,” where he says that, “in the end, they (the borders) tend to get in the way of possibility… because, when we see beyond borders, we see opportunity everywhere”.

The advert debuted on TV on September 24 and on VOD on September 30. The campaign also includes DOOH, OOH and print ads, including lines such as “Love knows no borders”, “Ethnicity should never be a barrier to opportunity” and “When we see beyond borders, we see opportunity everywhere”.

HSBC UK says that, as a bank, they believe in building a diverse and inclusive culture and that they’re working hard to make sure all of their colleagues are given equal opportunities regardless of background, ability, race or gender. The bank gives its customers the chance to update their account to match their gender-neutral title, helps those without a fixed address through its No Fixed Address service and financial education resources, helping them re-enter the financial system and get back on their feet, and has pledged £2 million to award University of Cambridge scholarships to 30 Black students, who will also have the option to explore work experience, skills development and mentoring opportunities with the bank.

Previous: Amazon Low Price Commercial
Next: Coca-Cola One Coke Away From Each Other Warrior and Gamer Commercial – World Of Warcraft