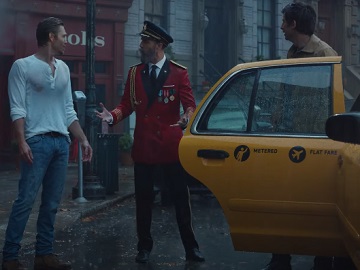 “Sometimes booking a trip can feel a lot like a rom com but you can’t go wrong with Hotels.com” this is the idea behind the latest Hotels.com ad.

The spot features Chad Michael Murray running after a man who’s about to get in a taxi, on a rainy day. The latter, named Todd, tells him that he can’t just stay there and wait for him to figure out what he wants. Murray’s character, Steve, answers he just needs a little more time, which makes Todd ask him how he is still so unsure of this. “What am I supposed to do? Leave my family?” Steve asks in return. “Yes, people do it every day,” Todd replies. At this point, Captain Obvious shows up and urges Stephen to stop overthinking it and book the bachelor party in Vegas.

Captain Obvious, who can’t help express his amazement regarding Stephen’s pectoral muscles, adds – at the end of the commercial – that booking a trip can feel dramatic, but with free cancellation you can’t go wrong with Hotels.com.

The Hotels.com iconic pitchman, played by Brandon Moynihan, made his first appearance in a Hotels.com ad in February 2014 and has become an advocate for the hotel booking portal, informing people about the Rewards program, while doing all kinds of things. In an election year, he decided to join the presidential race by actually running and campaigning with unique ads for all 50 states. The “Captain Obvious Runs for President”, which earned the reputation of “the most effective campaign in Hotels.com history,” saw Captain Obvious running on the campaign trail, featuring Hotels.com hotels as he went. To the UK market, he was introduced in May 2016 through a series of ads created by agency CP+B London.