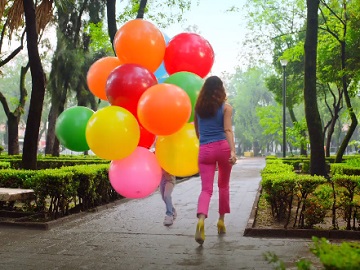 Honey Bunches of Oats are promoted in a new commercial, titled “Make a Bunch Happen”.

The spot features a woman who begins her morning with delicious Honey Bunches of Oats and then changes for the better the day of those she passes by. A man walking a dog finds himself surrounded by three dogs, a girl carrying one large balloon finds herself covered in several huge balloons as the woman, who’s rocking a colorful outfit, consisting of a blue top, pink trousers and yellow heels, walks by.

The Honey Bunches of Oats range includes several other varietes, including Frosted, with Almonds, with Strawberries, with Cinnamon bunches, Vanilla, Whole Grain Honey Crunch, and more.