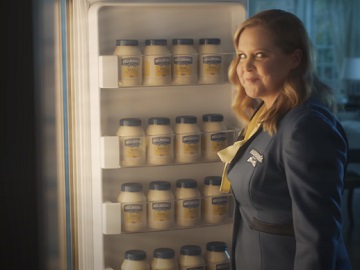 Hellmann’s is about to make some major mayo magic for its Super Bowl LV commercial.

The brand has released a teaser for its Big Game ad, featuring Amy Schumer entering a fridge filled with Hellmann’s mayo jars and apparently turning into a creature with wings. Titled “Amy Schumer’s Magical Mayo Transformation,” the teaser ends with the date 2.7.2021 appearing on the screen, which is the date when Super Bowl LV will be taking place.

Played in Tampa, Florida, this year’s Big Game will air on CBS.

Amy Schumer and Hellmann’s have teamed up with award-winning director, screenwriter and producer Peter Farrelly for a 30-second commercial that aims to inspire Americans to get creative in the kitchen and “make taste, not waste” with ingredients that might otherwise end up in the trash.

The ad will air in the second quarter of the big game.